For the fourth year in a row Primorye makes the inhabitants of Siberia and Central Russia to doubt, is it true that their calendar summer is so different from the duration of the season, which sets the racing calendar? An interesting confrontation with the best drivers in the D1GP multiplied by the gorgeous weather, and walking distance to the sea – the same factors that force drifters from all over the country, in spite of the distance and fatigue after a long season, to go to the September race in Vladivostok for many thousands of kilometers. The only truly international drift competition in Russia happened this year with the new configuration, and there is every reason to call Asia Pacific D1 Prim Ring GP version 2017 a new milestone in the history of domestic drift. 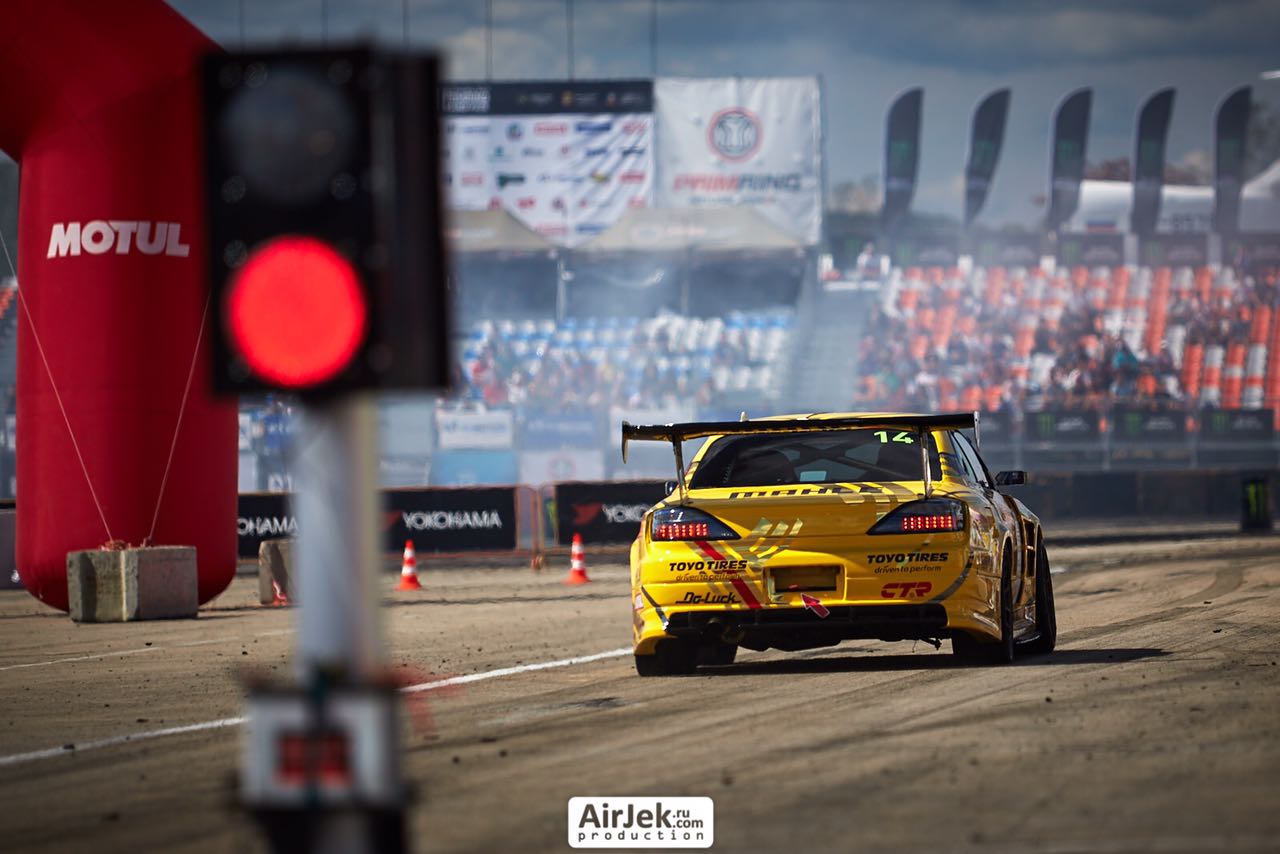 To some extent we had to sacrifice the final stage of the Russian Drift Series, to be ahead of the game in Vladivostok, and be able to show the Japanese the same "gruel", which I expect from all Russians fans. Ivan Nikulin simply could not afford to miss that race, and Gocina Silvia was loaded into container to send to Japan for the FIA IDC and other options for logistics we didn't have immediately after the speech in Sochi our Technicals with two cars on Board went to Vladivostok. As shown, it was the right decision, gained over a year of ZIP our Technicals helped in Vladivostok, not only to us but to many other participants. 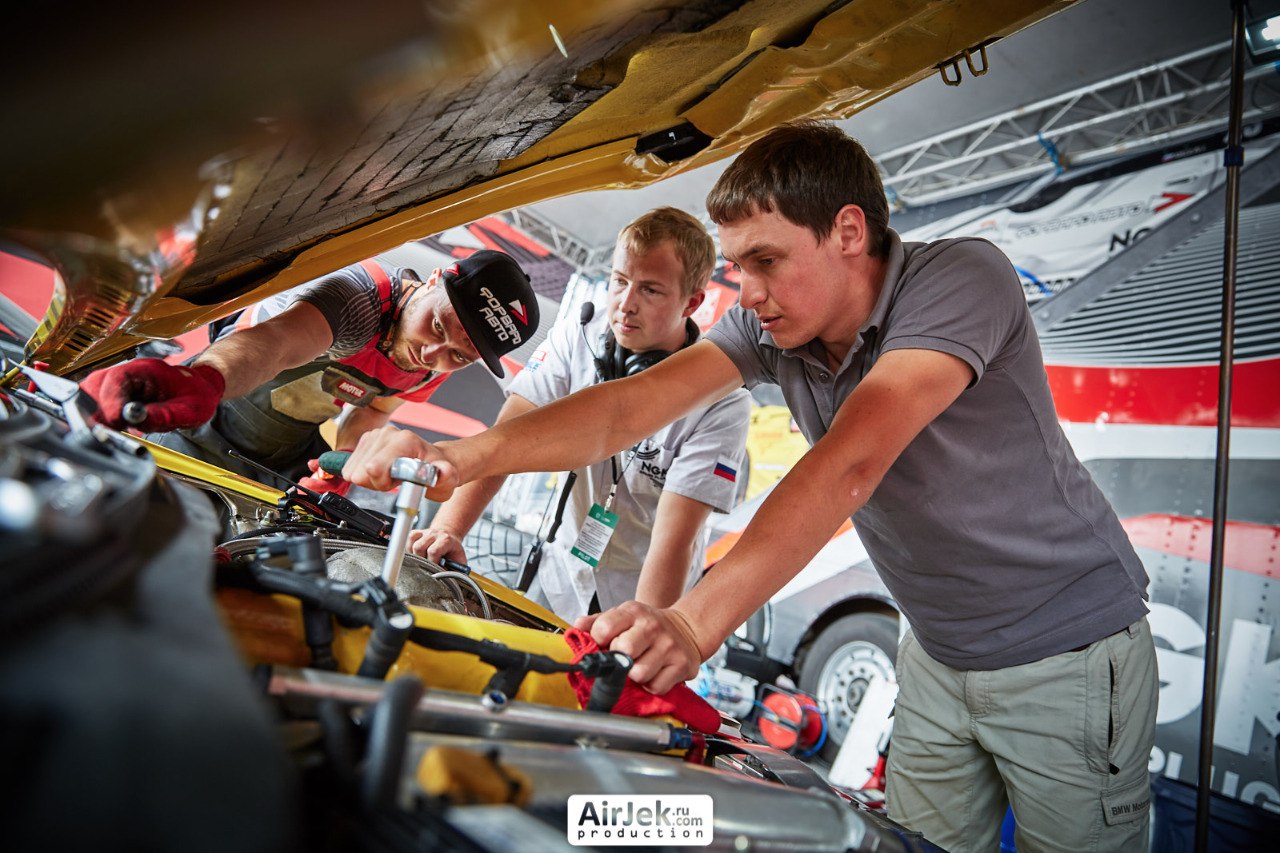 Three days on the platform "Priming" unfolding battles for podium places. Not everyone understands the scheme of the championship were forced to break down even the experienced participants, not to mention the audience, but all the tricks are intended to make it more cool drift, and Primorsky branch of the RAF and leadership Priming turned out in full! Starting from Friday afternoon and until Sunday evening, the stands were filled with diehard fans of the drifters, who have supported all without an exception of the pilots and applauded steep races. 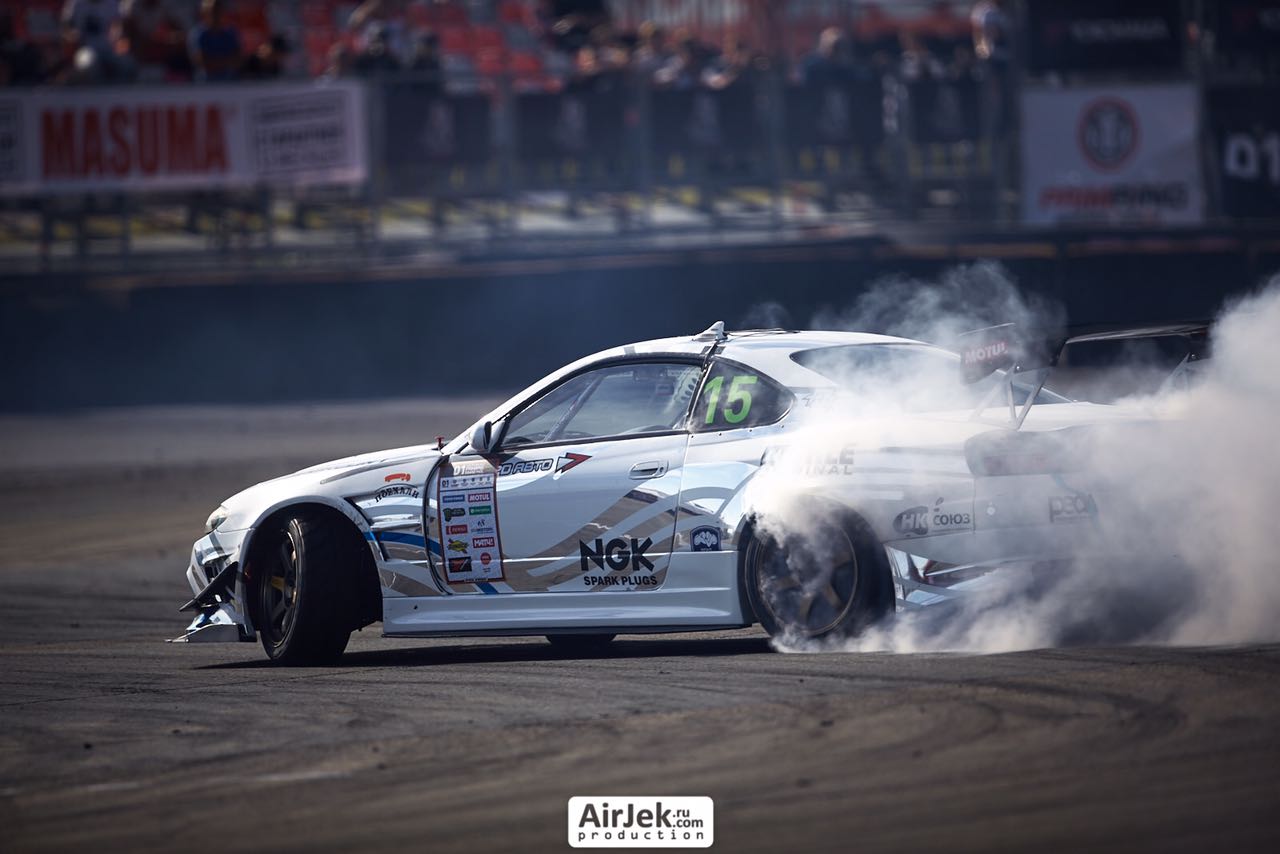 From the first trips to the track it became clear the Japanese are not going to take the position, and our guys already are seriously planning to overseas friends thoroughly "move". Ivan Nikulin repeatedly performed productions in a few inches of concrete wall, forcing not only the audience but also the mechanics of our team. Unfortunately, in the main qualifying race, James summed up the technique, and he remained 25 in qualifying, the only one not held in a pair of runs. Gotcha with a score of 98.9 points has long been the leader and lost only to Daigo Saito and Tetsuya hibino, who distributed among themselves the three titles of yesteryear on the results of the paired races. Behind were the leader of D1GP 2017, Hideaki Fujino, Masato Kawabata and the rest of the guests from abroad. 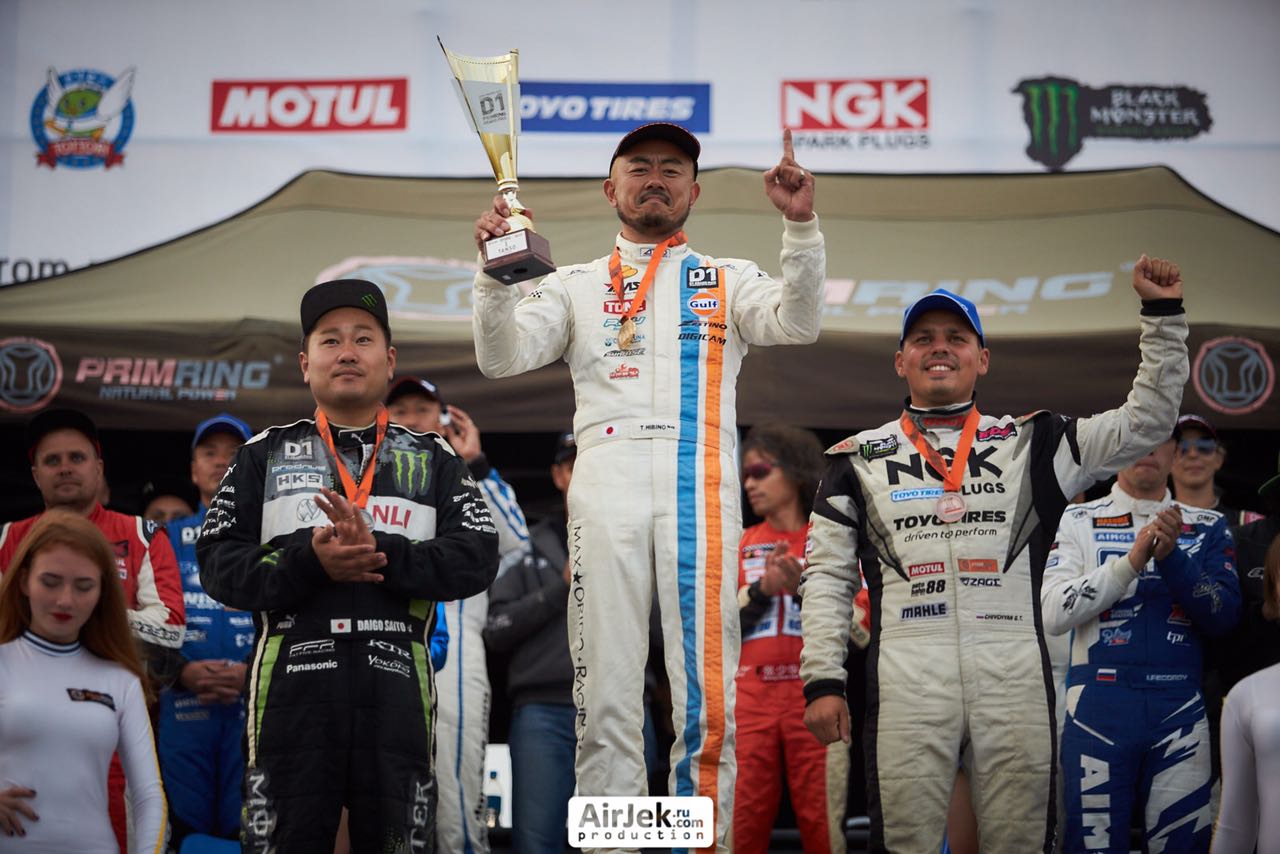 The doubles race was developed so that goche had to beat the first champion RDS-Siberia 2017 Dmitry ermohina, and then his old rival Arcadia Tsaregorodtseva. And it is against the Arcady George had the best race of the day playing catch-up according to the judge D1GP Hisashi, Kamimoto. Long-term practice of joint races, of course, played a role, but also felt in races gochi some incredible courage, growing with each start. For the first time "our" drifter was in TOP4 D1 Prim Ring GP. The new format of the TOP4, in which the semi-finalists were joined by two more Russians (the best in qualifying and winner of the audience vote), meant a mini-tournament for the finals where you had to win two races, or to show best score of the two races, the leader in DOSS (electronic judging system). The first opponent of gochi in TOP4+2 was Masato Kawabata, and empirically turned out that our S15 275-th tire Toyo Proxes R888R c low pressure it could contend with the GT-R35 in the dynamics, and the rest, as they say, a trick. A more stable travel the second, albeit with a little more distance allowed George to defeat the Japanese by a margin of 1 point, which was greeted with incredible enthusiasm not only our team, but all the stands! 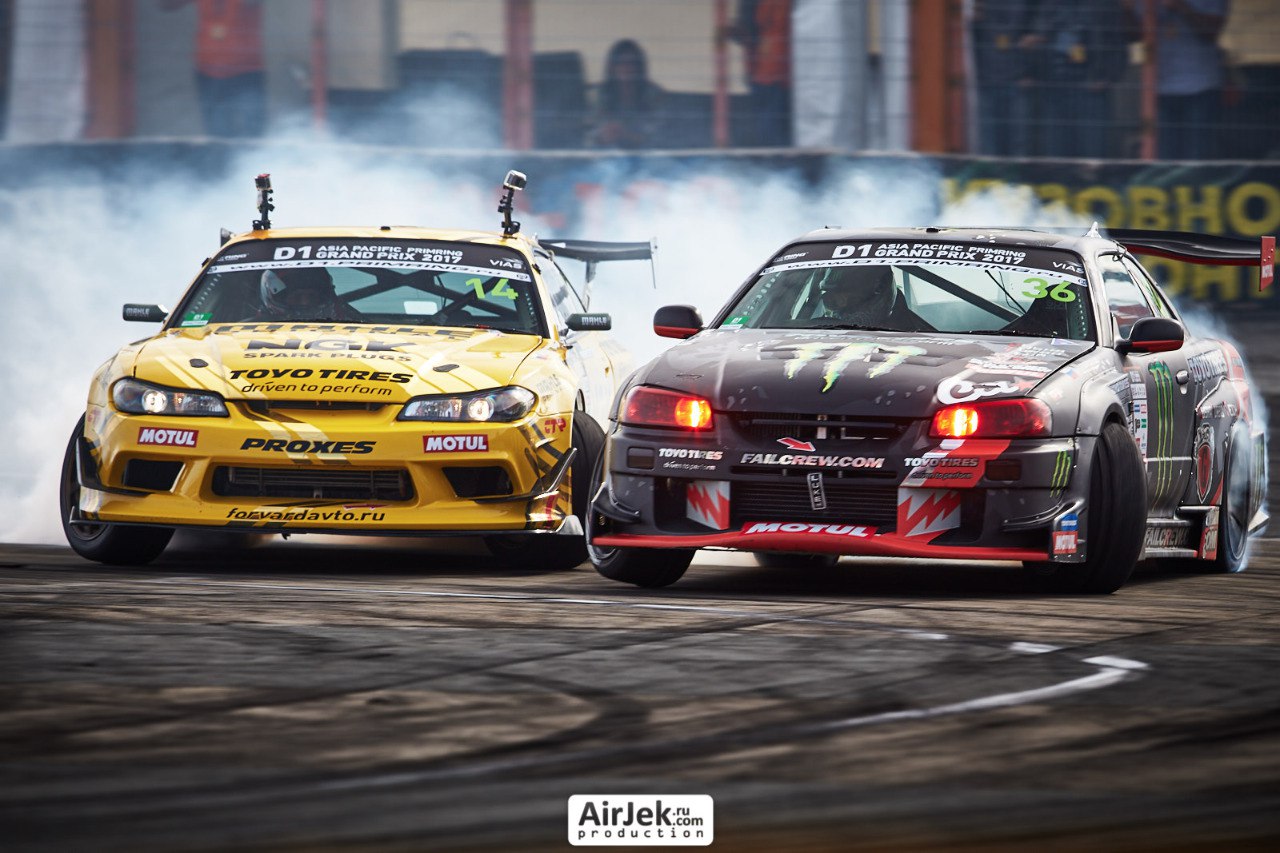 If the tests were performed according to the classical grid, the next step for gochi would be the coveted final. But this time the grid TOP4+2 meant the output in the pre-final races not four drivers and six, and this innovation cool down all confused. So, Goce had to spend one more trip with Damir by Idiatulina in which Gocha without assistance "cooked soup" and was eliminated from further competition. 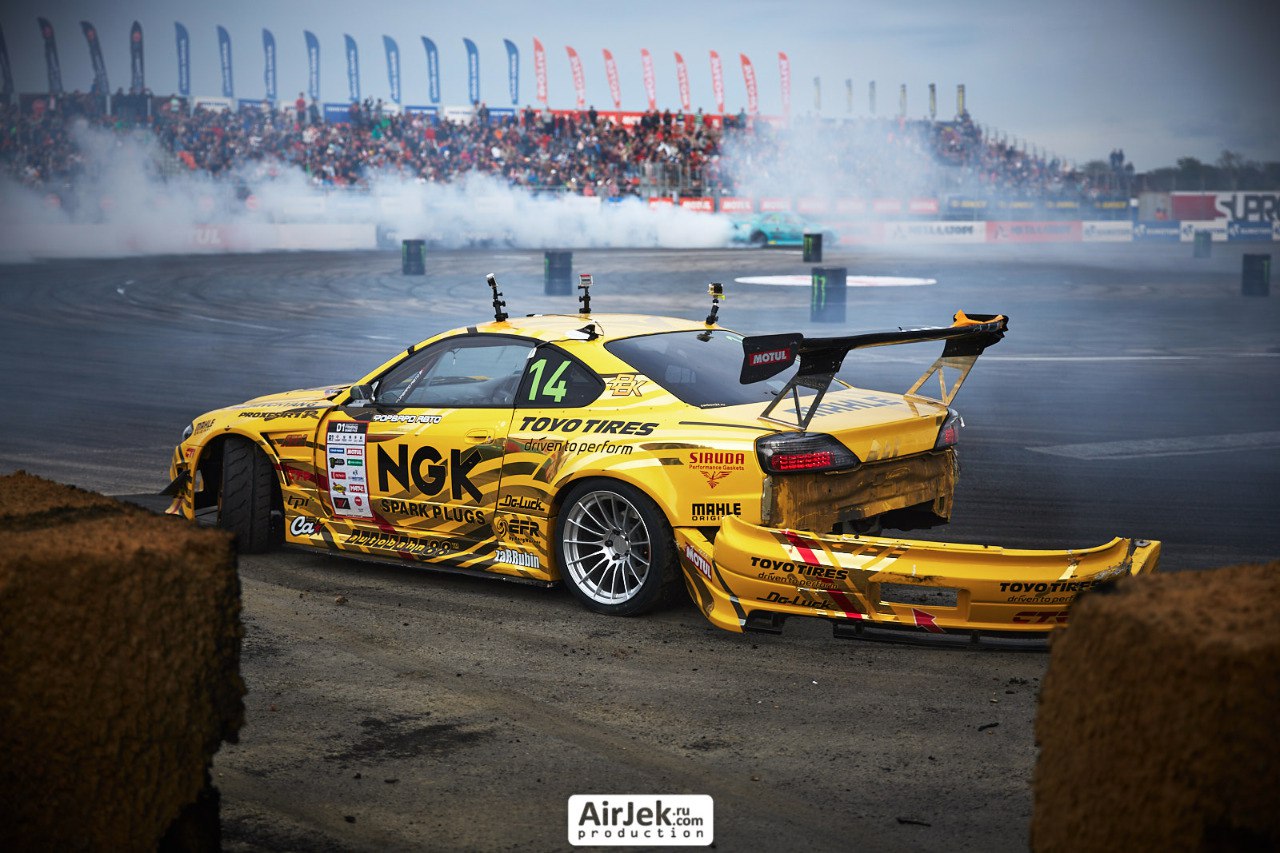 Nevertheless, even without the podium, our team flew from Vladivostok with a number of very important conclusions: Vanya is not a sacrifice for Primerovskaya concrete, and can abuse him shamelessly; platform Silvia with SR20 engine competitive on any level, and the engine digested quite bus with quite a hell of a grip; our ZIP-stocked so that we can in the field to repair not only half of RDS, but also many Japanese cars; our team can solve in the shortest time a large part of those that does not contradict the laws of physics and logic; Gocha and his S15 to the FIA IDC is ready! 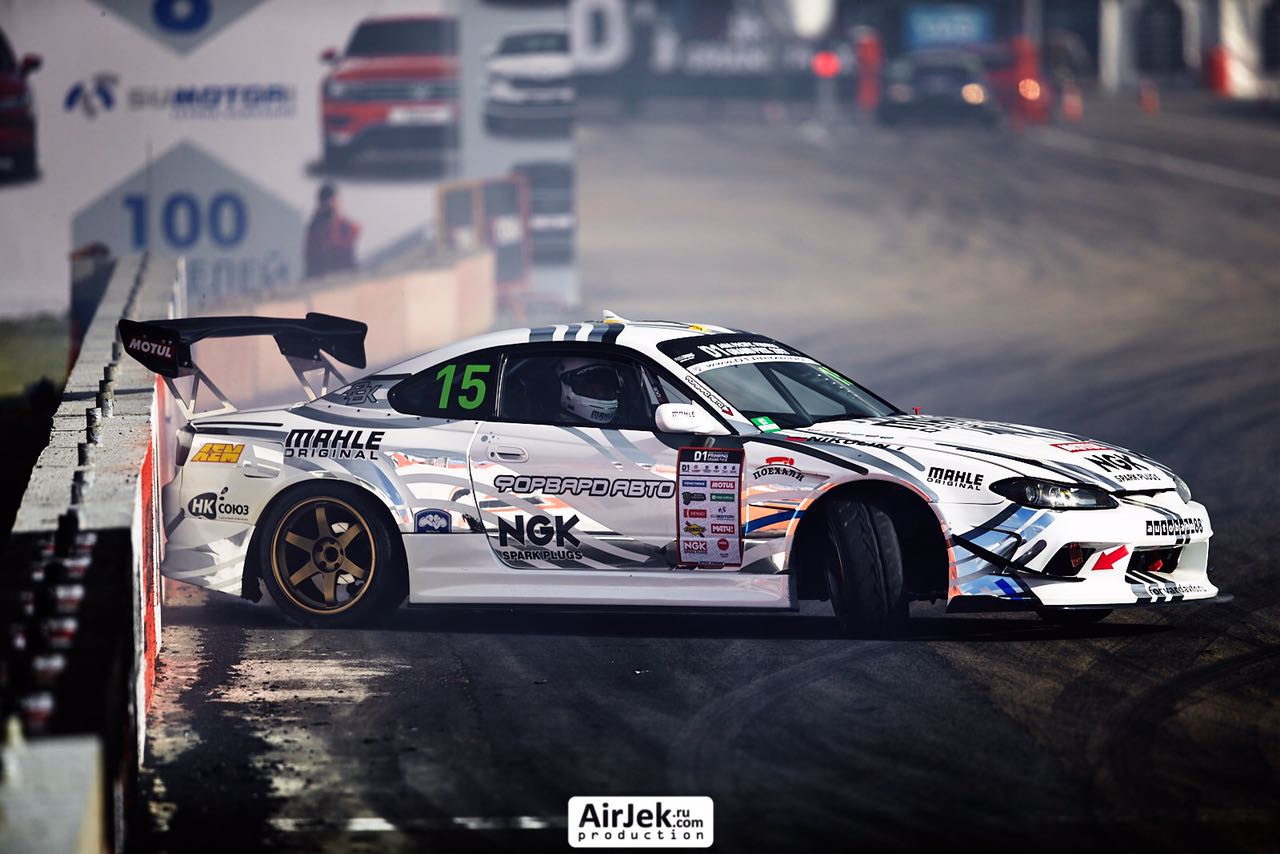 The flight to Tokyo three days later, the truck pulls the wheels kilometers of roads at the junction of the Irkutsk region and the Krasnoyarsk territory, and Krasnoyarsk almost around the clock are hard at work – "auto Forward" is preparing to exit the Champions Cup in Sochi Boss Vladimir realistic headlights and a low start waiting on service Squirrel Ivan Nikulin. Our service will be only 30 hours to accept this challenge very interesting. 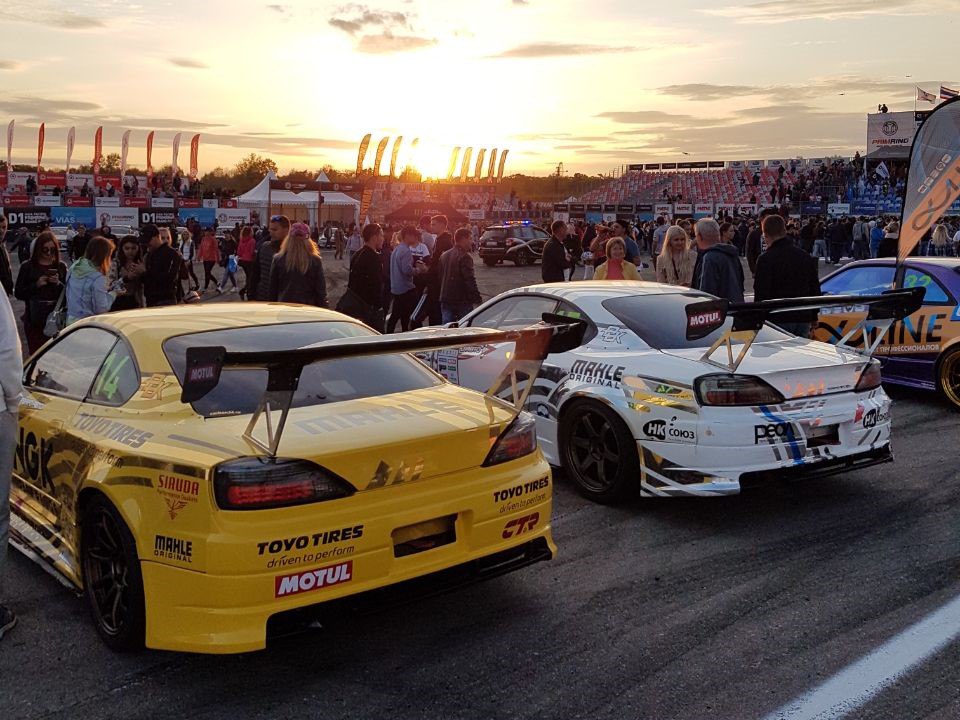 We once again thank the "Priming" for organizing this awesome event, thanks to which our model can answer the question: "What do we stand against pilots D1GP?", and calibrate your "Zoomer" compared to the best Japanese athletes.

Only authorized users can participate in the discussion.
Authorize

The use of the car in racing conditions, in particular the drift, provides a hard, sometimes even barbaric, operation of the transmission. Today, when many of the components are derived from road cars, stock their strength may not be enough.

"Breaking" the set of nodes transmissions, came to the necessity of solving the problem of overheating of the oil due to its small volume and constructive for the lack of cooling at the most popular units geared R200 from a Nissan Silvia transmission from a Nissan 300ZX, Skyline, Silvia, Toyota MarkII, Soarer, Supra.

The nature of wear has been removed for Troubleshooting nodes pointed to overheating as the cause, and this cause was decided to be addressed.

Pump brand Tilton chose for installation on the principle of "set and forget", it's a site with a great combination of reliability and performance.
The complexity and the costs of organizing the cooling of the transmission is worth it, because any failure in the transmission, not only repair costs, but the risk to go during the race.

I recommend to use a magnetic trap and flow-through filter.

The need to "boost" coolant circulation at a maximum distance from the inline pumps have motors almost always, and SR series engines are no exception.

The spacer was developed by engineers of the Japanese teamhttp://ameblo.jp/scorch/for improved cooling of the cylinder liner 4, which allows to avoid local overheating characteristic of the SR20 motor with high power.

Increase the reliability of the engine, reducing risks of overheating and detonation in the cylinder without significant complications in the design.

Use in the manufacture of exhausts in 2012.

Fits perfectly under the pipe on the Russian market - the pipe is inserted and obvalivautsya that allows you to accurately, conveniently and quickly scald the tube without special tool.

Thanks to the stiffening ribs, these flanges have high rigidity, in contrast to the flat - not leading them by welding.

Tacznosci pressure gauge in the drift has already become almost as important a parameter as in the ring - tire pressure is adjustable up to 0.1-0.2 ATM.

Chose RAYS because it is the absolute authority in the Affairs of the wheel, the pressure gauge is a reliable, shock-resistant (thanks to prorezinennogo the case), very easy to operate.

I realized that I was right when I saw this gauge Katie Gray, Busygin, Pasha, gochi realistic headlights.

I think that this thing will last me a long time.

Effective silent cooling solution for liquids - direct and return lines of the fuel system, oil, Gur, oil automatic transmission in places where layout considerations it is difficult to place a radiator with a more conventional configuration.

For example, Silvia is very convenient to realize the cooling of the fuel way from the fuel pump to the engine.

Can be cut to the desired length for a perfect layout.
Classic cars can even be placed on view, for example, under the bumper, looks great, works even better!

Use in the manufacture of exhausts in 2012.

Fits perfectly under the pipe on the Russian market - the pipe is inserted and obvalivautsya that allows you to accurately, conveniently and quickly scald the tube without special tool.

Thanks to the stiffening ribs, these flanges have high rigidity, in contrast to the flat - not leading them by welding.

Free call for all regions of the Russian Federation

Request a call back

We are in social networks